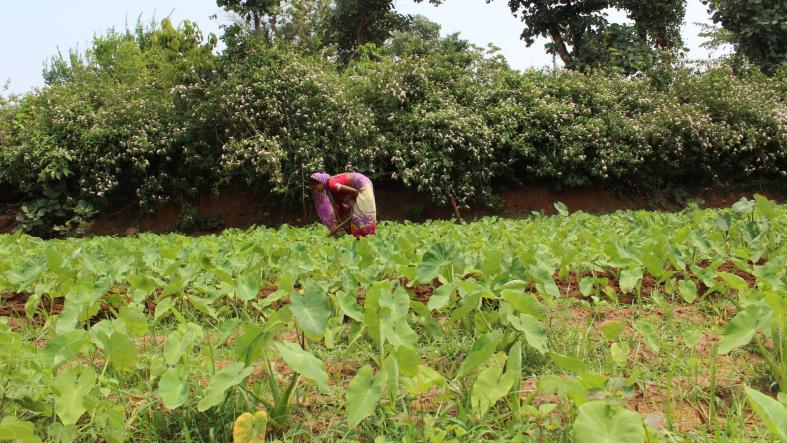 Three spokes in his back wheel have almost come off, but farmer Kunwar Munda adjusts his feet and continues to cycle. Even as the breeze rushes through his hair, it is never enough to match the scorching sun. Trees and the ground have been burnt stoney brown and dry.

After almost an hour of cycling, Munda arrives at a tented location in Mungadih village in Angara block in the eastern state of Jharkhand in India.

This is the third Kisan Mela (Farmer’s Fest) organized by USAID, the Centers for International Projects Trust (CIPT) and Birsa Agricultural University (BAU) under the Sustainable Agriculture and Farmers’ Livelihood (SAFAL) Program. Hundreds of farmers from across 15 villages have arrived here. Munda parks his cycle next to a large tree and joins a party of known faces from his village as a few hundred farmers continue to pour into the tent.

Among the arriving farmers is 22-year-old Sapna Devi. Unlike Munda, she had to cross a forested mountain on foot to reach the event. 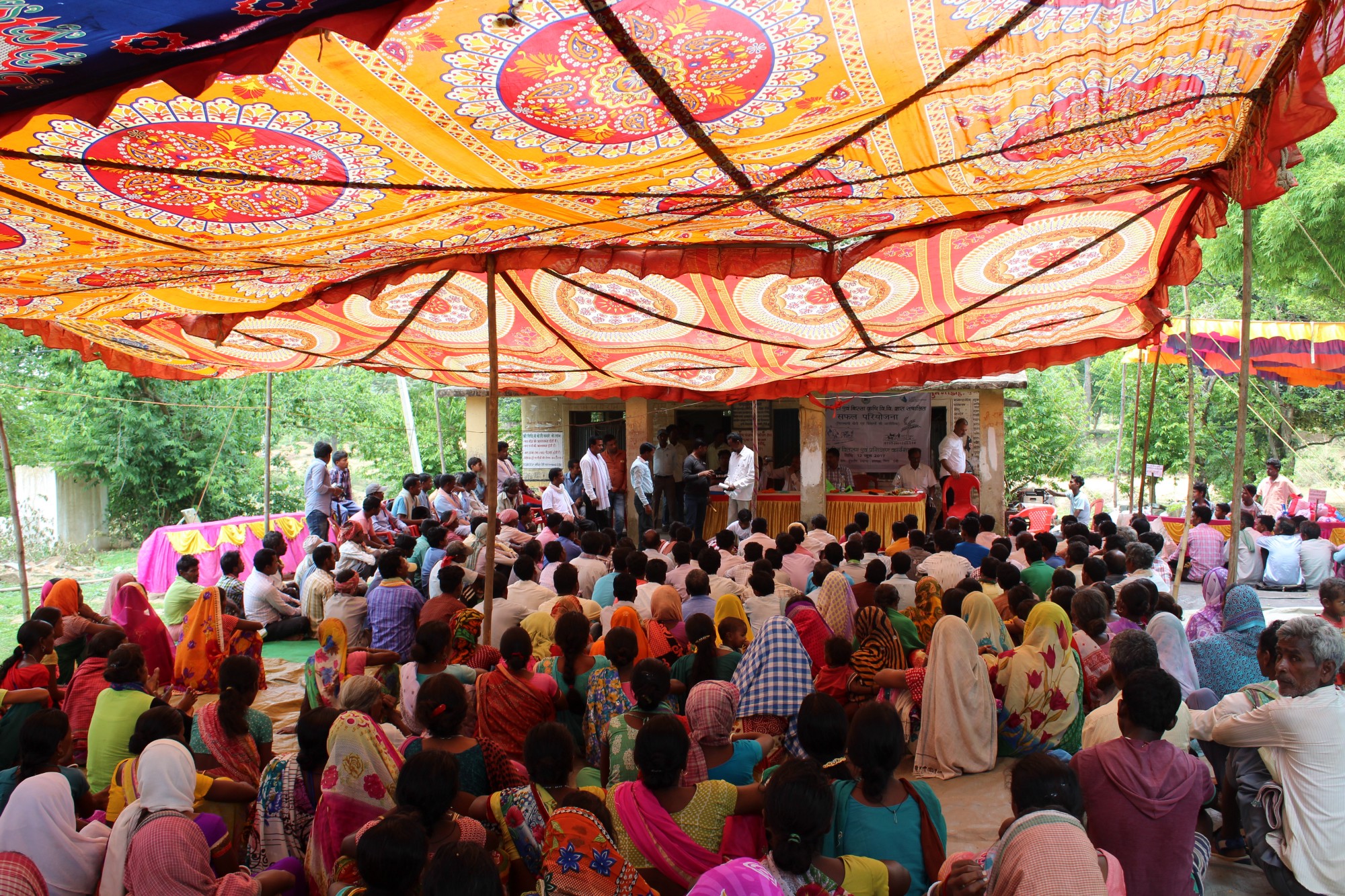 The farmers wait in anticipation before officials from the USAID-supported SAFAL project began distributing 1,200 bags of high-yielding rice seeds to the hundreds of farmers that have congregated. As names are called one-by-one, farmers queue to get their bags, each containing five kilograms of high-yielding rice seeds. As Munda collects his bag and rejoins his group, his face beams with a smile that’s unstoppable. “I have heard so much about these seeds. Farmers in villages near mine have doubled their crop production since they got these. And even the drought last year did not affect them. It is my turn now,” he says.

Munda, like every farmer in Jharkhand, is trapped in a vicious and complex agricultural quagmire. The state has a mountain topography, which means that the land here is rocky, uneven and less fertile. 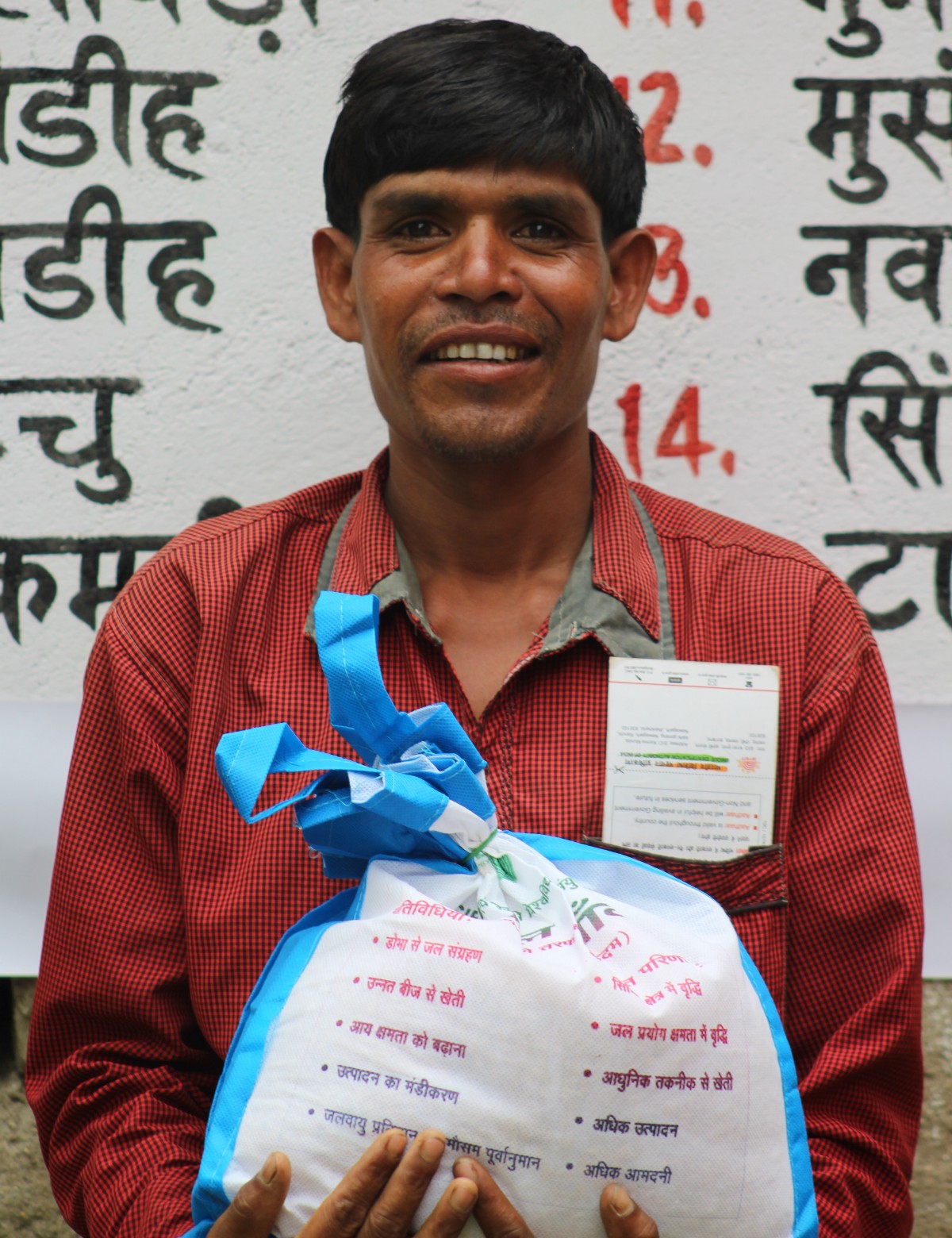 “Out of the state’s entire land mass, only 35 percent is cultivable land,” explains Kamal Vatta, director of CIPT. “And even though Jharkhand receives monsoon rains twice the national average, the state’s [sloping] geography means that 90 percent of the rainwater quickly washes away, leaving the farmers distressed with severe water shortage and periodic droughts.”

To compound these problems, farmers here grow a traditional, low-productive rice variety using farming methods passed on to them through generations. And, like most farmers here, Munda owns only a small plot of land. His father upon his death divided his one acre of farmland among Munda and his four brothers, leaving only one-fifth of the land each to cultivate. As a result, Munda barely produces enough to feed his family beyond six months. To break this cycle of extreme poverty and food insecurity, USAID organized the first Farmer’s Fest in June 2015. Through this project, 730 farming families were selected from across 10 villages to receive high-yielding rice seeds along with training in modern sowing and farming methods. 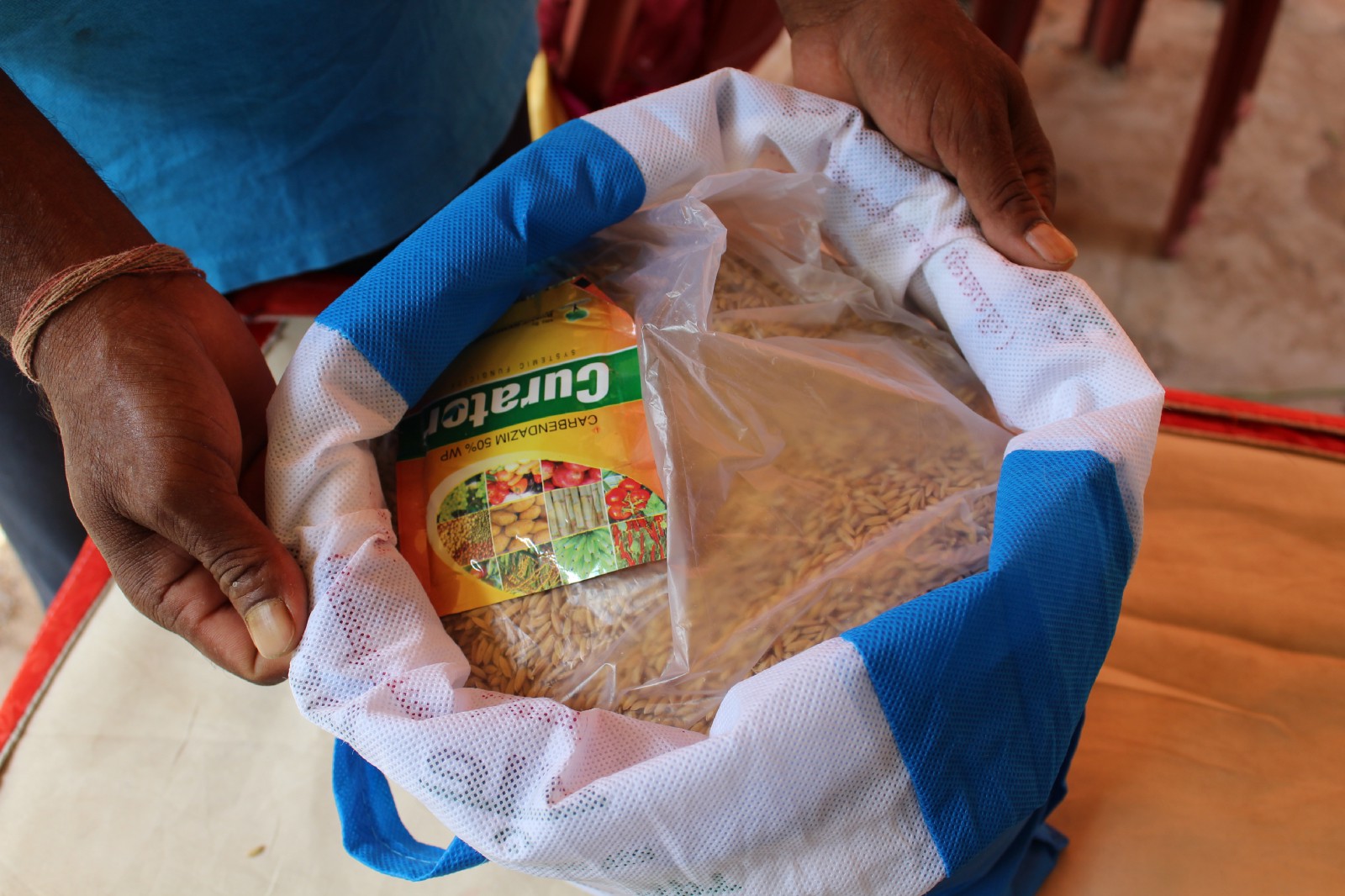 But seeds alone couldn’t do the magic.

“In India, farming is still rain-fed and rain-dependent. To cultivate a good crop, farmers need assured access to water during the months of shortage. That is why we began building dobhas or small ponds,” says Vatta.

A dobha is a low-cost rainwater harvesting technique where a 10-by-10 foot pit is dug to trap the rain water.

“Under the SAFAL project, CIPT and agriculture scientists from Birsa University used geospatial mapping to carefully identify rain and water stream patterns to build the dobhas in strategic locations. In the first year, we built 20 such dobhas — two each in the 10 selected villages,” adds Vatta. The farmers then draw the required amount of water from the dobha using a pipe powered by a pump. 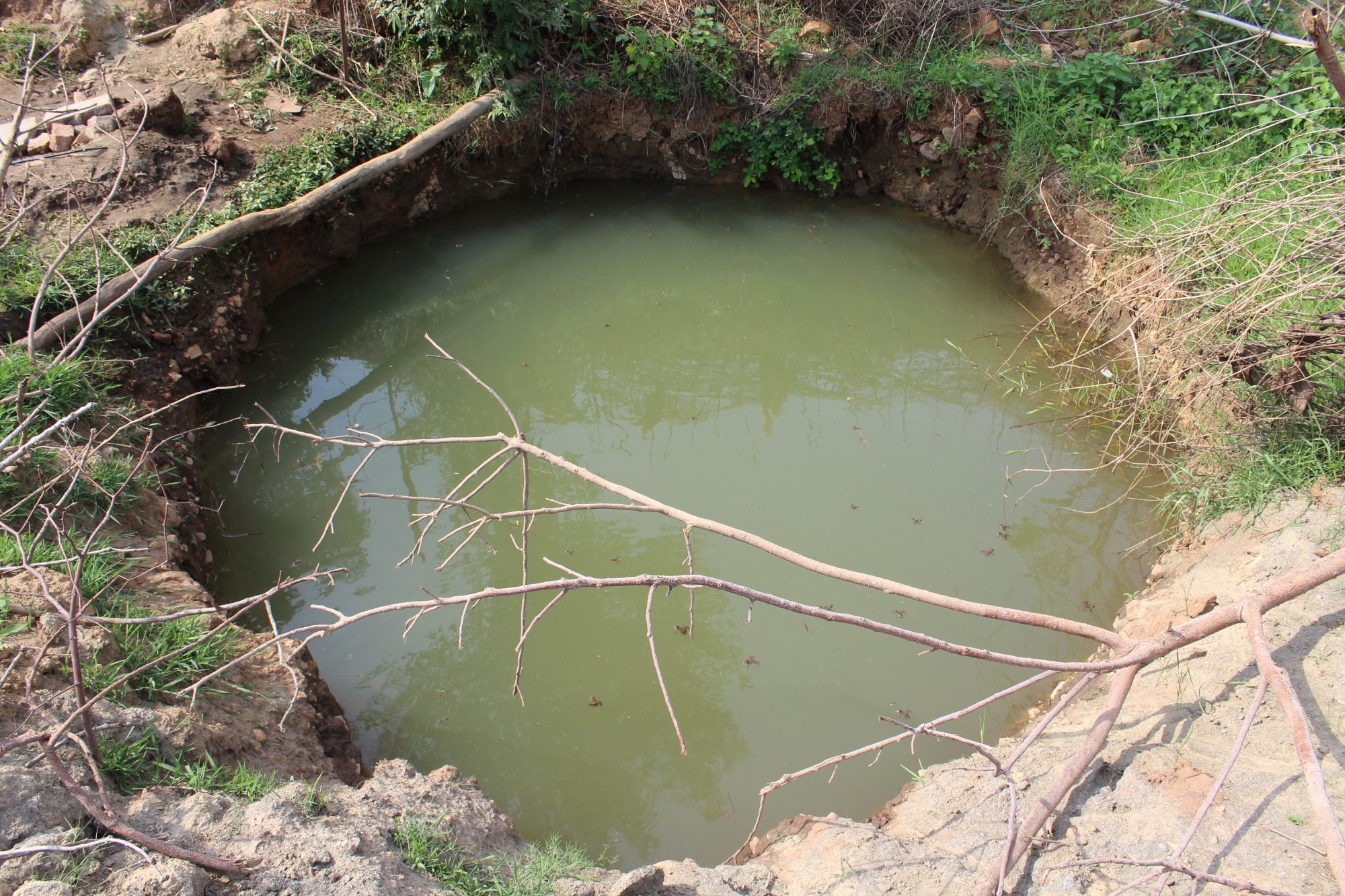 Farmer Sukhram Bediya from Mungadih village proudly shows the dobha built an arms-length from his less than one acre farmland. Whereas before he was producing barely 150 to 200 kilograms of rice a year, after utilizing the higher-yielding rice seeds and dobha irrigation technique, his production shot up to 450 kilograms in only a year.

“After I harvested the rice, the project staff provided me vegetable seeds which again turned out very well. I sold the vegetables in the nearby weekly bazaar, and now I earn an average Rs. 1,000 ($16) every week just by selling vegetables,” says Bediya.

Currently, lush green colocasia leaves (cultivated for its nutritious leaves and root) and ripened tomatoes cover his field. These will soon be cleared to be sold at the weekly bazaar and will make way for his next rice crop. 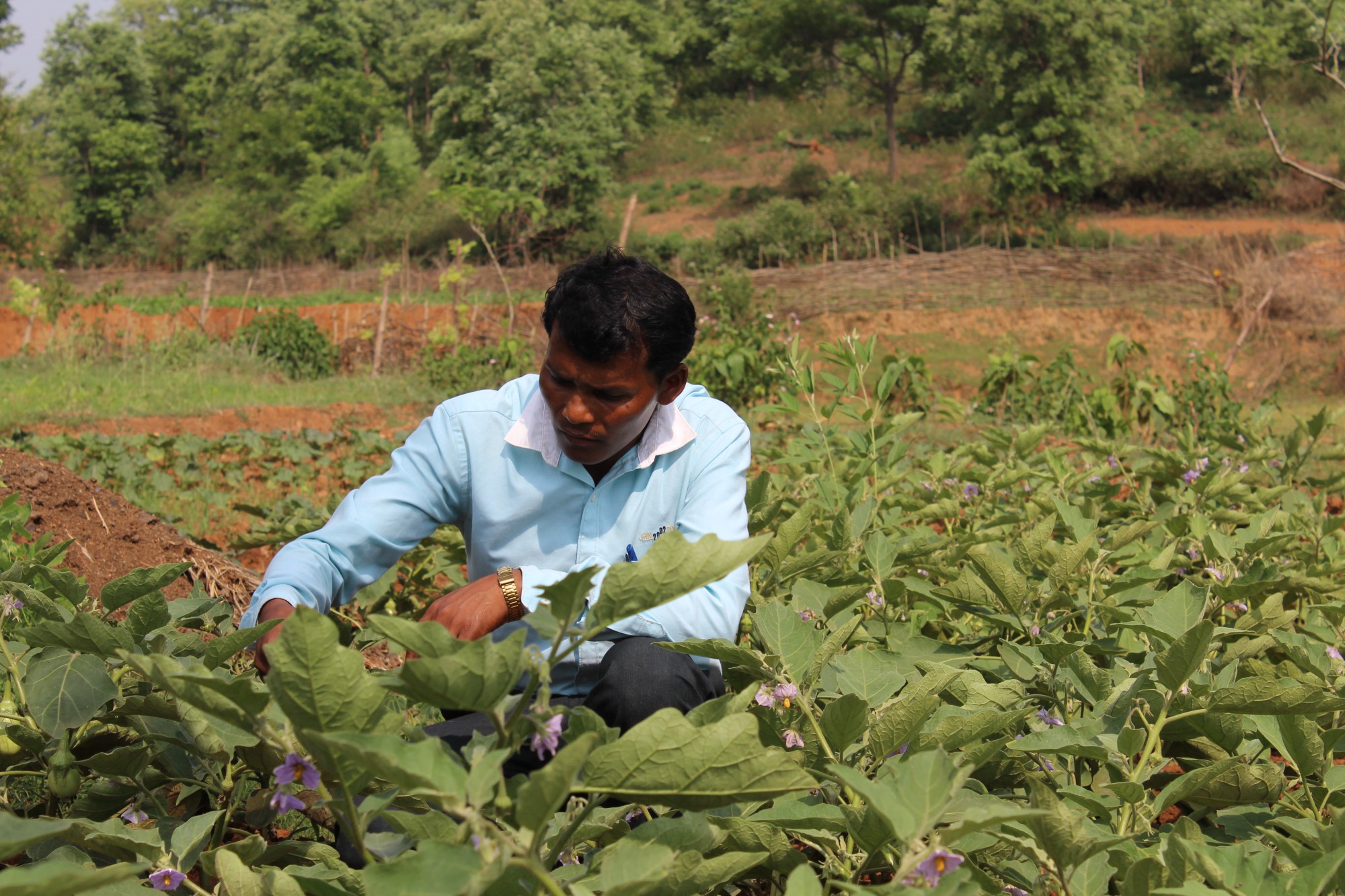 “In the last two years, I have never left my fields empty. I’m producing something throughout the year now,” says Bediya, a new gold-colored watch reflecting the sun as he smooths his crisp, light-blue shirt with his hands.

With rising farm production came rising incomes, and farmers like Bediya and Bharat Ram, who is from a nearby village, owe their newfound prosperity to the seeds and dobhas backed by USAID.

Bharat Ram’s daughter had just passed her Grade 10 exams the year he made Rs. 15,000 ($244) by selling a bumper cucumber harvest. “From that money, I paid Rs. 5,000 ($77) for her admission fees to enroll her into the Women’s College in Ranchi (the state capital).” Adds Ram with a tone of disbelief: “Who would’ve thought that cucumbers could one day pay for my daughter’s education.”

As these stories of transformed livelihoods traveled across villages far and wide, farmers like Munda and Sapna Devi began joining the SAFAL project. Like Bharat Ram, Munda too wants to send his sons to study in a private school in the city. “They are talented, bright boys and I know they’ll do well for themselves if they get the right education,” says Munda.

In the last two years, the project has built 320 dobhas in 30 villages in the Angara block alone and has enrolled over 2,100 farmers, providing them with access to water and seeds of hope.

The project has been so successful that the local state government has taken notice and plans to drastically ramp up dobha construction going forward.

“Based on the success of our program, the Jharkhand state government has now committed to construct 500,000 dobhas across the state by 2022, collectively saving 12.5 million cubic meters of rainwater,” says Vatta. The Jharkhand state government’s efforts support the Indian Prime Minister’s flagship national goal of providing “water to every farm” and doubling farmers’ incomes and productivity.

Farmer Sapna Devi, though, has simpler dreams. With the increased farm income, she hopes to buy herself a red saree. “It would look good on me, right?” she asks. “Oh yes, you’ll look very pretty,” giggle her friends from behind.

Published BY DIPNOTE | January 9, 2018“This story is prepared by CIPT in Jharkhand”“Neha Khator is a Development and Outreach Communications Specialist with USAID’s mission in India.”link:This blog was orignally published on State of the Planet Website